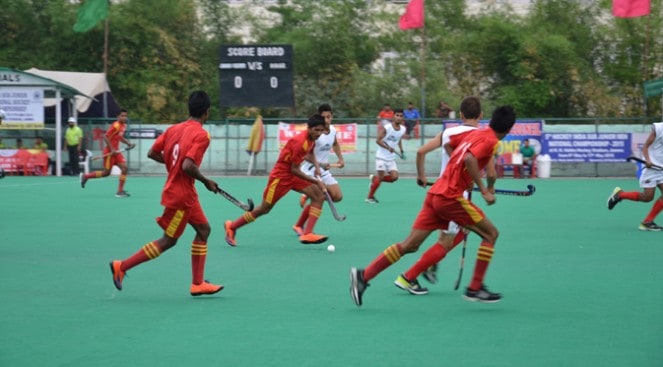 A HOCKEY MATCH YOU HAVE WITNESSED

Exchanges were more or less even in the initial session, though the University team for long spells pinned the District team to their own area. But when it came to scoring, it was the District team who took the initiative first Manoj tried to get the District’s attack going with some well-spread passes. The University team was out first with a penalty corner that could not be used to better advantage. Then followed good hockey, though unproductive as far as goals went, for the next fifteen minutes. A fine move between Sunil, Manoj and Ajay Sharma ended with the last getting the better of right-back Hari and hitting the ball in from next to the advancing goalkeeper. But even as the ball hit the boards, umpire Devi Singh pulled up Raman for obstruction and awarded a penalty-push. Ajit converted it into a goal. This happened in the 17th minute. The University team applied pressure, following the reverse and five minutes later, inside-right Jain scooped out from the top of the area. In the last minute of the first half, the District Eleven wasted a penalty corner hit.

Once the teams changed sides for the second half, the District team took over the attack and for about ten minutes gave the University defence a grueling time. The University team wasted a penalty corner. Immediately the ball was propelled to the other end where timely advance by Pawan stopped Aditya at the top of the “D”. The game swung to the District half with University forwards, spurred by Hari, going all out for the equalizer. They were not denied for long when Divyansh pushed the ball in from a hectic melee, following a penalty comer hit taken by full-back Wazir that was padded weakly by Raman.

But it was to be a District’s day, and now they subjected the equalizer, Lakhi Ram cut the ball as he took a penalty comer shot and goal was disallowed.

The next minute in a rare flash move by Ajay Sharma, the District team went ahead, put through by outside left, he entered the area with the ball well in control and dodged the advancing Pawan with a back-hand flick. Pawan stood bewildered as the ball shot past him into the goal.

The game was exciting from beginning to end and full of suspense too. The crowd was very enthusiastic and except at one point fully endorsed the judgment of the umpire Devi   Singh. No ugly incident marred the play. There was some partisan clapping and hearty shouts of “buck up, buck up” by the respective supporters in the crowd, but that always happens at such matches. The end-of-monsoon weather was   or S excellent, and the match was played in a picturesque setting in which the soft green grass blended beautifully very well with the contrasting blue and yellow colours of the District and the University teams.