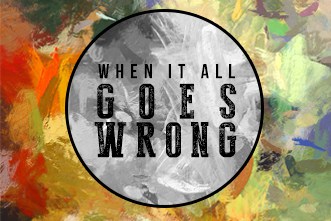 A DAY WHEN EVERYTHING WENT WRONG

It was Sunday morning I wanted to have a little more rest. But the dogs won’t stop barking. My room being by the side of the street it was I who had to face the gauntlet. I had only three hours’ sleep by five in the morning when the barking started. What throat the nature had provided this little canine with. They had no business to invade my dream land. But they did. The green lush sea shore, the distant boats dancing on sea waves, the coconut trees inviting the travelers to have a drink from the green fruit, I just enjoyed nature at her best-the scene changed. With a prince’s robe I entered the palace in the forest where the princess was asleep for the last hundred years in her golden surroundings just waiting for me to transform her with a touch. Lo! She was awake-the whole palace was full of activities. The sleeping beauty was just to embrace me when the evil dog barked fill throatedly. The princess disappeared-no trees-no sea-no dancing boat. I was there in the corner of my room. Let curse fall on the small canine that spoiled my morning.

Mother won’t give me tea. She waited and waited for me. But how could I leave my angel-the one who waited for me for a hundred years. There’s a limit to everything-even to waiting. And mother went to temple. Doesn’t matter I would prepare tea. I opened the kitchen, put water on gas burner. But where’s the milk. Doesn’t matter I shall have black tea. I went for the sugar container. It slipped from my hand and fell on the kettle. I couldn’t resurrect my mood-left the kitchen to have a cup of tea at a roadside restaurant. The man was waiting for the milk vendor; and why should he come when I needed him the most.

The tea chapter being over I rushed to the library to see my result hardly knowing which paper had published it. But all the papers were in the clutches of people who won’t leave the stands. It took me an hour to catch hold of the paper with the result. I scanned the whole sheet. When I was about to reach my number at the bottom of the page the sheet betrayed me. Someone had notched the very corner. I was rather plunged in darkness. Although I had appeared with a good preparation and was expecting a good class too my mind was under the dark clouds of doubts. How will I face my father-and I decided not to go home.

Where to go? What to do? I gathered courage and decided to go to the University-eight kilometers to go. I got in a bus. With no money in my pocket who will allow me to proceed. The bus conductor seemed just a Shylock-would demand his pound of flesh. And he did. Had he asked me to-get down the matter would have settled. But he won’t. It was an opportunity for him to humiliate a gentleman in the presence of a number of beautiful girls. Two whistles and the bus stopped. He showed me the gate-four kilometers from my house. I had no option but to walk the distance.

It was noon when I entered my room. Well it was the doomsday. Father was waiting for me. ‘Have you seen your result’ came question like a sharp arrow from a deadly bow.’ No I haven’t. ‘But I have, why you appeared at all to secure a 111 class. You ought to have rather dropped. What will you do with the rotten degree?’ Had mother not inter­vened I might have been forced to miss the lunch.