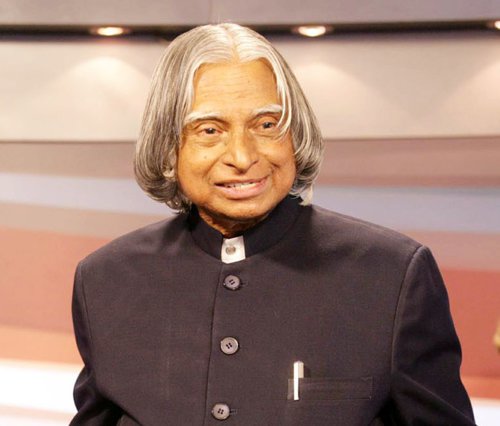 The Voyage of Avul Pakir Jainulabdeen Abdul Kalam from his house on Thittakudi’s Pallivasal Street in Rameswaram to the palacious Rashtrapati Bhavan in lutyen’s Delhi is full of odds and honours. This humble son of a boatsman and a newspaper hawker himself in his childhood who would go through the news himself before selling the papers hardly knew that a day would come when people would purchase the papers to know his own achievements as a great scientist and as the 11th President of India—Abdul Kalam.

The biblical reference that the meek will inherit the earth comes true about this simple humble man who was Padma Bhushan in 1981, Padma Vibhushan in 1990 and Bharat Ratna in 1997 as a token of nation’s appreciation. His spartan simplicity has always been retained. As principal scientific adviser to the Prime Minister, a cabinet rank post he did not move to a bungalow meant for him — instead he retained the two rooms in a Defence Ministry guest house that had been his home since he headed the D R D O from 1992 to 1999.

No one could be a better President for this comparatively poor nation, whose sister had to pawn her jewellery to send him to Chennai for a diploma in engineering from Madras Institute of Technology. The man has changed the very face of the country with his researches in space, building India’s first satellite launcher the SLV 3. In 1980s he also made the country a missile power by developing the Agni and Prithvi. In 1998’s Pokhran blast he gave India weaponising nuclear capability. He believes that India lost its greatness in the past as it become technologically inferior. He firmly believes that such arms deter other nations from attacking or subjugating India and are, therefore, ”weapons of peace”.

When some say that his choice was due to his religion it must irk Kalam. Religion to him has always been an intensely individual quest. He refers to the Bhagvad Gita as often as he does to the Koran. It was the Gita that be quoted when he met reporters in Chennai after his nomination was announced. He would always visit the temple of Lord Ramanathaswamy whenever he is in Rameswaram.

Born on October 15, 1931 Abdul Kalam celebrated his 71st birthday after becoming the first citizen of India. He displays remarkable energy, working late into the night and waking up early to go for a two hour walk. It is his spartan habits—he is a vegetarian, teetotaler and has never smoked—that allow him to be constantly alert. Abdul Kalam is a bachelor as is the Prime Minister too. Atal Behari has adopted a daughter but Kalam has none to look after that way. He is permanently wed to Science and technology that may feel a bit widowed after the groom as President takes the hectic responsibility to host someone or the other every day. Of course the hardest hit by this bachelor would be the ladies of the officers whose abode is President’s House who would not be given parties as they were in the past by the first lady of the country. After the result was finally declared Abdul Kalam said, ‘Let me understand the political system. Till a few days back I was just a professor at Anna University teaching final year students.  On being asked who will  be the official hostess he rather quipped, “I am a brahmachari”. Before being nominated for the President’s post Abdul Kalam had shocked almost every one with his decision to quit as principal scientific adviser to the government. He was rather preparing to go back to Anna University when he had to repack his humble belongings to enter the Rashtrapati Bhavan. On being asked his reaction he said, “My story is a story of a scientist tested by failures and setbacks; the story of a leader supported
by a large team of dedicated professionals”.

In his autobiography—Wings of Fire — he describes himself as “a short boy with rather undistinguished looks, born to tall and handsome parents. I ate with my mother. She would feed me on the floor of the kitchen, place a banana leaf before me on which she ladled rice and     aromatic sambhar, home-made pickles and a dollop of fresh coconut chutney.” His beginnings were more than humble. He writes, “My Father    was a boat-owner inRameswaram. I even sold newspapers in my childhood.” But in his race to success he hasn’t left anything to fate. He says, “When one has orbited around the sun 70 times (he had crossed the age of 70) change becomes a necessity. This change must bring with it now thoughts which lead to innovative actions. I know my imagination will never let me down. Neither will my dreams. Technology can change the future of man. I have seen it happen in my lifetime”.

Abdul Kalam is the seventh and youngest child of A. P. Ambalam Jainulabuddin Mohammed and Azija Ammal. His eldest brother and head of the family A. P. J. Muthu Meeran Labha Marakkar said, ‘it’s an honour to Rameswaram. My prayers to Ramanathaswamy (the deity of Rameswaram temple) did not go in vain.” Naseema Begam, Meeran’s youngest daughter said, the family would offer special prayers at the mosque and Rameswaram temple.” We are making Sakkarapongal, which will be distributed to all the people here. Also, an abhishekam will be done for the deity of Rameswaram temple. “The temple is an integral part of our life,” She said. Besides thirty members of Abdul Kalam’s family, Rameswaram temple’s priest Venkatasubramania Shastri, Kalam’s childhood friend also attended the swearing in ceremony of Kalam as President of India.

In his ten minute speech after being sworn as the President on July 24, 2002 he, like Narayanan, quoted from Thiruvalluvar’s Thurukural composed 2000 years ago to emphasize that the important elements that constitute a nation are being disease free; wealth; high productivity; harmonious living and strong defence.” Kalam emphasized that national security was “a national priority. Indeed making India strong and self reliant—economically, socially and militarily—is our foremost duty to our motherland and to us and to our future generations.” He also put emphasis on empowerment as had Lord Krishna done in the Gita. He said when the leader of an institution empowered others “leaders are born who can change the nation in multiple areas.” He further said, “A roadmap for realizing this vision of a developed India is in front of us…   If we work and sweat for the great vision with ignited minds, the trans­formation leading to the birth of a vibrant developed India will happen.” He rather said that the task was immediate. Quoting Kabir ‘kaal kare so aaj kar aaj kare so aab.’ (What you want to do tomorrow, do it today, and what you want to do today, do it now), he said there was need for focused action on the part of the one billion citizens to ‘ignite their minds to face challenges like cross-border terrorism, internal conflicts and unemployment.”

His hobbies are calming. He plays on rudra veena and writes Poems in Tamil and then translates them in English. In association with Arun Tiwari Abdul Kalam has written his autobiography ‘Wings of Fire’. In ‘Ignited Minds’ the President writes, “As a young citizen of India armed with technology and love for my nation. I realize, small aim is a crime. I will keep the lamp of knowledge burning to achieve the vision-Developed India.”

As President Abdul Kalam kept his humble posture intact. For days together he stayed in the Dwarka Suite where many former Presidents stayed for many months waiting for the family wing to be refurnished        according to their taste. “None of this for Kalam who has moved in all alone. He even keys in stuff by himself. Except for a whitewash he did not want any change in his Presidential suite in which he moved after two weeks. Sometimes he would not use even the lift and takes the stairs instead. He showed no awkwardness, no fuss, and no demands except for some books.” At 6:30 a.m. the President sets off for a morning walk in the Rashtrapati Campus. People line up his route. He would oblige the children with a warm handshake. As he shuns publicity he won’t go, for the same route the next day. Back at 7.30 he scans the day papers especially Tamil. After bath and a simple breakfast the brahmchari President is in his office by 10. Taking a lunch break at 2:30 he is back to work by 4.30 and never leaves office before 7:30. In his suite, the lights are on till quite late. No one knows when he calls it a day”, said an officer of the Rashtrapati Bhavan. Humility is the strength of the 11th President of India-never seen when other resided in the palacious palace of the Rashtrapati.