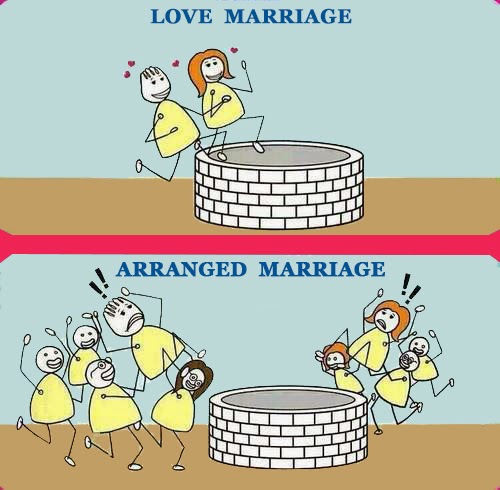 Traditionally in arranged marriages, the decision is made by the parents. In arranged marriage, the parents are usually very confident of their child agreeing to whomever they arrange their marriage with. The guy or girl is then left with little choice but to agree. Then there is the emotional pressure or even emotional blackmail. Parents beseech their children to agree to a proposal before they die or make use of other emotional pressures. In Indian culture, marriages are considered a union of two families, not merely two individuals.

When it comes to love marriage, the two people tie the nuptial knot only after falling in love with each other and probably, after knowing each other for a long time. They get ample time to explore both the good and the bad things about each other, well before marriage. This helps them to develop a good comfort level after marriage, very effortlessly. On the other hand, if two people do not know much about each other, when their marriage is arranged by their parents, then they might take some more time to develop a level of comfort, understanding after marriage. Here, love marriage scores more than arranged marriage in this case.

It is said that compromise or mutual adjustment is a factor that decides whether the marriage would work out or not. In case of love marriage, people might expect more from their partner, largely because they have fallen in love before marriage. This leads to lesser compromises, as the person expects more from his/her partner. On the other hand, compromise and adjustments form the foundation of arranged marriage, largely because the married couple does, not have any preconceived notions or expectations from one another. The compromise factor might work wonders in case of most of the arranged marriages, while in love marriages, that might prove to be yet another cause for altercation. Due to this factor, people consider arranged marriage as long lasting and better than love marriage.

In case of an arranged marriage, the married couple could resort to their parents or acquaintance at the time of financial crises or other problems. In addition, if the marriage proves to be a failure, they have a number of people around them to support or to put the blame on. Their parents would come forward to solve the problems between the couple, if they have married with the elder’s consent. This is the reason why arranged marriages are considered secure for the people in India.

On the other hand, the couples who have solemnized love marriage would have to tackle all their crises on their own, because they might have been separated from their family. Resentment drives the parents and the relatives to remain dormant in case the married couple wants any financial or moral support, a common sight seen in love marriages in India. Due to this factor, many people do not want to marry without their parent’s consent, because they would be ultimately cut off from the family ties.

Indian daughters hesitate to defy their parents. Marriages are considered a union of two families, not merely two individuals, so bloodlines and reputations matter-the children meet and spend time together and decide whether their relationship has a future. A voluntary process, no different from having your friend’s fix you up, the fixed-up like to say.

Love marriages offer more independence and freedom as compared to arranged marriages. Knowing somebody before marriage allows partners to have better respect and understanding for each other’s needs and desires. This way they are better adjusted in the marriage when they finally take their wedding vows.

In love marriages you know a person from inside out; they care about each other’s feelings, why should one spend one’s whole life with some stranger.

In the love marriage your partner will be someone with whom you can share interests and who will encourage your independence. As with any relationship, friendship is the key. Good communication from the beginning will help to ensure that yours is a lasting and beneficial partnership. The young man and woman make the final decision about marriage between themselves, though they seek the advice and approval of their parents and their go-between.