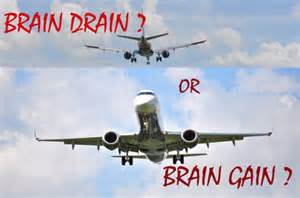 FROM BRAIN DRAIN TO BRAIN GAIN

“The brain drain has been a curse for developing countries like India. Throughout the post World War II era, the best and brightest routinely left for search of better economic opportunities and higher standards of living in the West. Entire graduating classes from the elite Indian Institutes of Technology emigrated during the 1970s and 1980s”.

Every year, tens of thousands of highly specialized professionals and academics leave the developing world for what they believe to be a better quality of life in countries of the North. The majority of doctors, engineers, lecturers, researchers and senior managers as well as students are tempted by more attractive career opportunities, salaries and living conditions. A university degree is also the safest passport out of an unstable political environment.

In this era of globalization, the high skilled workers are moving freely and trapping the global opportunities. This -new dimension of international migration is passing through an experience of Brain Drain and then followed by Brain Circulation in many parts of the globe. In many parts of the world, brain drain .is giving way to the process of brain circulation as talented immigrants return to their homeland with technology, capital, managerial and institutional know-how, to harness promising opportunities. Such evidences are already emerging in India.

From late 1960s, a strong wave of well-educated and professionally competent immigrants from India, started moving towards the industrially advanced countries. But now in every field of technology, returning emigrant Indian technocrats and scientists are taking India into the forefronts of technological innovations, where brain loss is compensated by corresponding brain gain. For sustaining this process, we have to create opportunities in India and have to promote young talents to work in India, for making brain circulation a catalyst for India’s accelerating development.

As per the UNESCO report (1969), “the brain drain could be defined as an abnormal form of scientific exchange between countries, characterized by a one way flow in favour of the most highly developed countries”. According to Part II of the World Economic and Social Survey (2004) on International Migration, large scale global migration took place after 1970. In 2000, there were 175 million persons (2.99b of total world population) living outside their country of birth where 20% of this were accounted in US only. It has been found that the overall economic impact of migration is beneficial for destination countries primarily through due to the supply of skilled labour. On the other side, economic benefits form out migration to the developing countries is ambiguous. These countries are suffering from ‘brain drain’, which includes inability to make use of migrant’s talents and wastage of resources spent on the migrant’s education. Experience of migration of skillful people differs spatially, i.e., country to country as well as temporally. So, every country has a unique experience of migration it cannot be generalized.

In case of India, from 1950s, a strong wave of out migration of skilled workers is well marked which is still continuing with increasing magnitude. Technocrats and expert professionals moved towards the western countries such as USA, Canada, UK and Australia as permanent migrants largely. In the 1960s and 1970s, the flow of scientists, engineers and medical personnel from developing to industrialized nations was thought to have almost entirely negative consequences for the source countries, affecting their university staffing and availability of industrial personnel. Recently, however, there has been growing emphasis on reverse flows of knowledge and skills and of money the migrants send home. What was once termed brain drain is now seen as brain circulation, but this has blurred important issues affecting most developing countries.

A little over two decades ago, when the then Prime Minister Rajiv Gandhi during a visit to the United States to meet with President Ronald Reagan was asked about the flight of top professional talent from India to the US, he said it was not a ‘brain drain’ as it was being dubbed, but a ‘brain bank’ for India to draw upon whenever necessary. Indian Ambassador Meera Shankar was asked the very same question by the members of The Indus Entrepreneurs Washington DC chapter during an interaction. She too, like the former Prime Minister said, it was not a brain drain, but rather ‘brain circulation*. “What goes around, comes around, and I have seen that movement of Indians to other countries has had a very positive impact back in India.” Expanding on this point Shankar said, “once Andhra Pradesh was one of the most backward States in India but now it is one of the most developed State, thanks to the engineers, technical experts and scientists who came to the US, gathered useful knowledge and then exported that to their home state.”

Brain migration is not always carrying adverse effects even on the sending countries if there is exchange of scholars,  researchers,  engineers and technocrats, scientists, medical experts between developing and developed countries or within developing countries with the purpose of mutual benefits’ in the form of knowledge sharing. But iri the reality, such type of brain circulation is not taking place until and unless the sending country itself becom e competitive enough to attract the talented mass with creating opportunities and favourable work environment for them to work. For a long period, since Indian independence, India was fighting for creating basic infrastructure and for providing mere basic amenities to its inhabitants. India is still struggling for these at some level. During this period, our economy was not competitive, private sector was immature, research and development institutions were in infancy stage and because of inability to make use of migrant’s talents brain drain became an Unavoidable process.

Developing countries with these bottlenecks can  not  offer modern professionals the economic rewards and desirable social conditions.

In the last few decades, India has improved upon these areas. Presently, India is emerging as a favourable destination for the young talents. In India, there is a remarkable progress in the development of basic infrastructure, Indian economy is sustaining in the global competition and playing effectively in the multilateral marketing structure, Indian research and development institutions are providing good research environment and giving high level research outcomes in many areas such as space technology, information technology etc., Indian multinationals have emerged as a global players in the last two decades.

Today, India having over 250 million middleclass population with good paying capacity for maintaining their livening standard and providing better educational opportunities to their children. Nearly half of India’s population is in working age group ofl’5-59 years. In the coming decades, India is going to become a hub of technically sound human resource which will again strengthen the knowledge based economy of India and will transform the India’s image in world context. India is the fourth largest economy in the world in terms of purchasing power parity, and expected to become third largest economy of the world in the first half of 21st Century after USA and China. India is moving forward in many areas such as development of infrastructures, improving research and development in   science  and  technology,   world   trade, competitiveness with sustained high economic growth. Much of economic success experienced by India during these decades can be attributed to her large base of human intellectual resource capabilities, knowledge industry and most importantly the continuous effort in the promotion and innovation of science and technology. India is now ready to attract its young talented mass to work in India, thus, it provides opportunity for brain circulation. Nasscom, a trade group of Indian outsourcing companies, estimates that more than 30000 technology professionals have returned India during years 2004 & 2005. In Bengaluru, the high-tech oity of India, thousands of overseas Indians (IT professionals) have set up their home. Besides Bengaluru, Hyderabad and National Capital region are the most preferred destination for these returnees. Here, they are getting Western style work environment, good remuneration and quick career jumps. It has been noticed that most of returnees are first-generation expatriates, along with this second-generation Indians living in US are also returning. The year 2010 saw as many as 60000 Indian professionals who had settled in the USA, return to India. With the economic depression naming loss of jobs as the crucial factor for coming home, the fact remains that some of the best minds are back.

There is a remarkable increase in foreign investment in research and development in India over the last five years, is an indicator of India’s growing reputation as an intellectual powerhouse. Return skilled workers and researchers are working as catalysts in this boom. Major developments in medical and information technology research along with many other scientific areas giving signs of brilliant future for India: In 2001, to slow down the emigration of Indian IIT pass outs and other engineers IIT Bombay set up an information technology incubator at the Kanwal Rekhi School of Information Technology (KReSIT).

This incubator has started building a culture of entrepreneurship in the areas of making intellectual property’ and products among IITians and encouraging them to work in India. Several government departments have stepped forward to support the initiative. On the line of this IIT Delhi, IIT Kanpur and IIT Madras have also started their own business incubators. The level of success of these incubators in persuading IITians to take up entrepreneurship as a career option in India that can be judged after passage of time.

This is a reality that only a few countries have been successful in luring their talented emigrants back home. China, Korea, Ireland etc. countries got relative success in attracting return migration due to the opening of their economies and aggressive policies to foster domestic investments in innovation and R&D. Developing countries with some infrastructure in R&D, like India, are likely to attract the returnees, as well as money and business contacts. Countries which are capable to create opportunities for research and development, innovation and entrepreneurship can stimulate return migration and capital flow. In many parts of the world, the brain drain is giving way to a process of brain circulation.

For these developing countries need to open their economies, formulate effective science and technology policies, develop world class institutional infrastructure, and improve physical infrastructure, high grade social amenities and supportive work environment. India in regularly progressing on these lines and a clear indication of initiation of brain circulation can be seen. For strengthening this process, India has to work more aggressively to fulfill its Commitments towards implementation of these strategies. Indian policymakers now have opportunity to transform the brain drain from a curse into an asset.