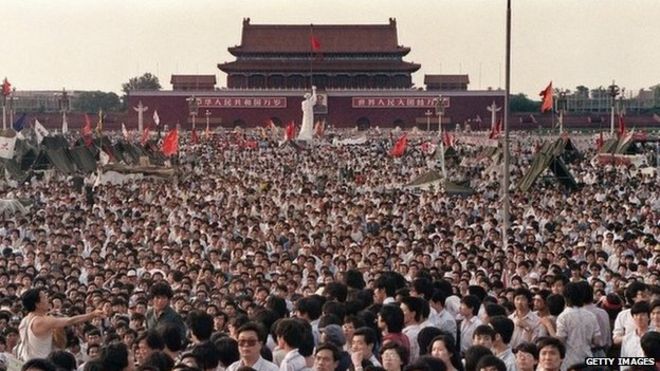 Tiananmen Square is somnolent this June. Chinese tour­ists in T-shirts loll in the shadows along its northern perim­eter. Two small police cars roll softly by on opposite sides of the world’s largest square to ensure that it stays this peaceful. The eye tells you in this and other ways that China has moved tar beyond the uprising of students, workers and some offi­cials that captured the world’s interest and admiration before being brutally repressed 18 years ago this month.

Beijing has become an urban Godzilla since then: Con­cave, convex and cantilevered skyscrapers march erratically across the ridges of an unending, perpetually smog-filled sky­line. These canyons of steel and glass corporate fortresses visually testify that money and material ambition have totally eclipsed the demands for democracy – and honesty in govern­ment – that filled the streets in one of the 20th century’s great moments of peaceful public protest.

The ear hears this message as well — from China’s com­munist leadership, from h foreign investors who pour dol­lars, euros and yen into the world’s manufacturing hub, and from ordinary citizens who speak about the “events” at Tiananmen Square in June 1989 with great caution or undis­guised evasion. How obsolete of you to ask what remains of the spirit of Tiananmen. they suggest. After all, the world moved in the name direction after the 1980s, an under-appre­ciated decade that was filled with mass political movements in Poland, the Philippines and East Germany, and which set the stage for the demise of the Soviet Union, in 1991.

The political ferment of the 80s quickly gave way to obsessive popular concern with money and spreading free markets around the globe that has not run its course. Pre­cisely because it was unfinished, the Tiananmen revolt still shapes China today, even if in subterranean fashion. A visi­tor’s eyes and cars do not tell the full story. This country’s communist government runs nearly as scared as it did when its troops killed hundreds, probably thousands, of protesters 18 years ago,

The repression of organized political dissent continues to be a tool of control for China’s current leaders. But their one-party monopoly on power is based even more on providing annual economic growth rates of around 10 per cent that bring a highly visible flow of consumer goods and other material benefits to the country’s urban population. “The Chinese government does much to encourage the development of the economy and con­sumption of consumer goods, entertainment and sports. But any political media would be highly controversial”, says Vic­tor Yuan, head of a Beijing market research company.

President Bush predicted last week that this dichotomy could not last – that free-market reforms would inevitably lead to political reform. China’s leaders do not share this belief. Neither does the man who ranks as the most important dissi­dent in China today. Bao Tong was a senior aide to Prime Minister Zhao Ziyang and played a leading role in crafting China’s initial economic reforms in the 1980s. However, Bao was jailed for showing sympathy towards the pro-democracy demonstrations. Released from prison into house arrest in 1996, he has only recently been allowed such freedoms as meeting with foreign journalists.

“Yes, there is change. When I walked in the park today, I heard criticism of the government that would have brought death sentences in Mao Zedong’s time. But nothing like this can be broadcast or published in the media. Nothing like this can be said in an organized meeting. Nothing will be allowed that would affect the political situation. The change you see and hear is the flowers, and the leaves. However, there is no change in the root. That is the party’s control over everything, including control over the market Money is to the leaders today what revolution was to Mao – a tool to control the peo­ple”‘, the 74-year-old former official told me. “The unchanged root is the one-party dictatorship”.

So, did the students and workers of 1989 fail? No, Bao responds: “They should have protested, and they did. The party failed. The party violated the constitution and its own char­ter. It became a communist party without communism, with­out any concern for the people. I feel proud of those who protested. I feel ashamed of the leadership”.