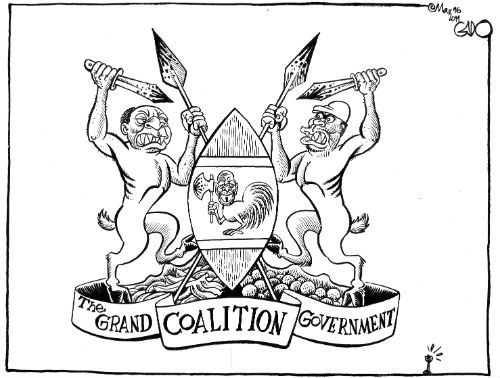 It appears that the chapter of a single party rule in India has become a matter of the past. The most significant development in Indian political scene since 1996 has been the emergence of coalition era in Indian Politics. Till 1989, the stable government at the centre under the leadership of Smt. Indira Gandhi and her son Rajiv Gandhi did well. In 1989, the country was amidst instability as Rajeev Gandhi lost power and Mr. V P Singh took over as the next Prime Minister of Minority Government. Mr. V P Singh had to step down as BJP withdrew its support. Mr. Chandra Shekhar assumed power and formed Government with Congress support from outside. But it was a matter of four months that Congress-I also withdrew its support and the President announced fresh polls. Congress came back and stayed in power from 1991 to 1996. In 1996, the Congress was voted out of power and the United front which mustered support of 14 parties formed a unique Coalition Government with Congress-I, that once again decided to support from outside. Again the coalition failed and election for 13th Lok Sabha were held and the Coalition Government under the leadership of Atal Bihari Vajpayee took the reign of the country. The 14th and the 15th Lok Sabha also gave rise to Coalition Government under the Prime Minister ship of Dr. Manmohan Singh, with number   of partners   supporting   either   from   outside   or   inside the Government. The present 15th Lok Sabha is also a coalition government.

Often the instabilities prevail, when the coalition governments are formed on the basis of negative reasons e.g., the United Front was conceived with the sole objective of preventing the BJP from forming the government, the BJP-BSP Alliance in UP was formed to keep the Mulayam Singh Yadav away from the power, the Rashtriya Janta Party – Congress combine in Gujarat had the sole objective to keep the BJP out of power. Many of these alliances were post poll pacts without any ideological compatibility and once power was gained, the intra as well as inter-party differences over the key issues made the functioning of the government very difficult.

The first UPA formed soon after the 2004 general elections after it had became clear that no party had won majority. The NDA had won only 169 MPs in the 543 member 14th Lok Sabha, as opposed the UPA tally of 222 seats.

The Left Front with 59 MPs (excluding the speaker), the Samajwadi Party with 39 MPs and the Bahujan Samaj Party with 19 MPs were other significant blocks that opted to support UPA at various phases of its rule. The UPA did not enjoy a simple majority on its own in the Parliament, rather it has relied on the external support to ensure that it enjoys the confidence of the Indian Parliament similar to the formula adopted by the previous minority governments of the United Front, the NDA, the Congress government of Narasimha Rao and earlier governments of VP Singh and Chandrasekhar.

An informal alliance had existed prior to the elections as several of the current constituent parties had developed seat-sharing agreements in many states. However, it was only after the election that the results of negotiations between parties were announced. The UPA Government’s policies were initially guided by a common minimum programme that the alliance hammered out with fruitful consultations with Jyoti Basu and Harkishan Singh Surjeet of the 59 member Left Front. Hence, government policies were generally perceived as centre-left, reflecting the centrist policies of the INC. The Congress party is today more closely aligned with the neoliberalism, strongly advocates social democracy and social liberalism.

During the tenure of Jharkhand CM Madhu Koda, the constituents of the UPA were, by mutual consent, supporting his government.

In 2009, UPA won the general elections with the Congress winning 206 seats, 61 seats more than the 2004 election tally. The pre-poll coalition of UPA, which did not include Lalu Yadav’s RJD, Ram Vilas Paswan’s LJP and Mulayam Singh Yadav’s SP, won 262 seats, and needed the support of 10 MPs to get a simple majority in the Lok Sabha. Manmohan Singh continued to be the Prime Minister and in doing so became only the second Prime Minister of India after Jawaharlal Nehru to return to power after a full five year term in office. RJD, SP, BSP, JD(S) and other smaller parties and independents provide external support to the government.

To get India moving again, UPA-IFs leaders have to retake the initiative by
reclaiming the narrative. The PM has to spell out why we need further
economic reforms and clearly enunciate how we will address the concerns of
those who lose out. If one of the fathers of India’s economic-reform-led growth cannot convince us on the next steps towards prosperity, who can? We desperately need to see the Manmohan Singh that we saw during the nuclear deal. He now needs to remind us that the economy is safe in his hands and to demonstrate that by getting the engines of growth revved up again. That means reaching out and preempting and preventing the thousand cuts from friends and foes in politics and industry. That means that when reforms like in retail stall, he still needs to initiate investments in the agricultural supply chain that will transform the farm-to-fork equation. Foreigners don’t have a monopoly on ideas on what needs to be done. UPA-II must drive investment in such infrastructure anyway, and transform the prospects of farmers and consumers.

In the UPA’s division of labour, Manmohan Singh is the head and Sonia Gandhi the heart. The Prime Minister’s task is to ensure economic growth. The mission of Sonia Gandhi and the National Advisory Council is to ensure that the fruits of economic growth are shared with India’s voluminous have-nots. With regard to poverty alleviation, the UPA leadership has enormous credibility.

The NREGA has created a social safety net and pumped purchasing power into the palms of the poor. Now, the food security initiative has the potential to address another fundamental problem gnawing at our conscience and self-respect—that large numbers starve or are crippled by undernourishment.

But tremendous attention needs to be paid to fix potential flaws in these programmes, to ensure that a culture of dependency is not fostered, that other externalities are not created and that the delivery mechanisms are leak proof.

The fight for inclusion will continue. Political empowerment by leveling and opening up a cleaner electoral playing field, gender empowerment through women’s reservations, economic empowerment for backward minorities, educational empowerment for our hundreds of millions of youngsters. There is no shortage of agendas or action items on UPA-II’s list of New Year resolutions. If UPA-IIs leadership steps forward and reclaims the narrative, India can cast aside the annus horribilis that 2011 was an usher in an annus mirabilis in 2012 and beyond.

After initial hiccups coalitions are now less brittle than before and this is bringing in greater amount of political divergence in the process of governance. Several instances have revealed in the past that a multipolar political system (a Coalition Government) has its own system of Checks and Balances’ and there is no apparent logic to yearn desperately for a return to a bipolar polity.

There is no point in blaming the people or the political system for returning hung or fractured verdict that have resulted in houses not lasting their full terms. Coalition has some weakness or demerits like blackmailing by coalition partners, the withdrawal of support on trifle matters of self interest, without caring for the loss suffered by the nation. The Prime Minister is kept busy in courting the coalition partners, having no time for development.

The present Government may find some solace because of the ninety seventh amendment to the Constitution which disqualifies all elected legislators who violate party whip irrespective of the size of defecting faction. The earlier provision recognized a split of one third of the membership a valid defection, now this provision has been repealed. The scourge of defection had literally scared the face of Indian democracy; the most rightful outcome has seen to negate the verdict of the people as defecting legislators scamper across parties with abandon in search of greener pastures, ignoring the party symbol on which they were elected. It is hoped that this amendment will stop the prevailing sordid practice of defections by the political leaders.

Many suggestions were put forward to help the country out of the problem of withdrawing the support on trifle issues or blackmailing to grind their own axes by the coalition partners. One suggestion was to switch over to the Presidential system; another was derecognition by Election Commissioner of Political Parties getting less than 10 per cent of votes in the elections. This of majority, it should be given chance to govern, even if other post poll combine manage to muster a greater numeral strength. The best solution to avoid frequent elections would however be that we incorporate a clause from the German Constitution, though of course with an all party consensus, that whenever a no-confidence vote is passed may definitely check the proliferation of small, even one person parties. Another suggestion was that only poll-election combine be recognized and even if such combine is short against an incumbent prime Minister, the house in that very sitting will have to elect a new Prime Minister with majority, failing which, the defeated Prime Minister would continue in office. This would obviate the need for frequent elections which our country can ill afford. Whatever remedial action be taken should be after through deliberations and with consensus of all parties, keeping in view the interest only of our beloved nation.