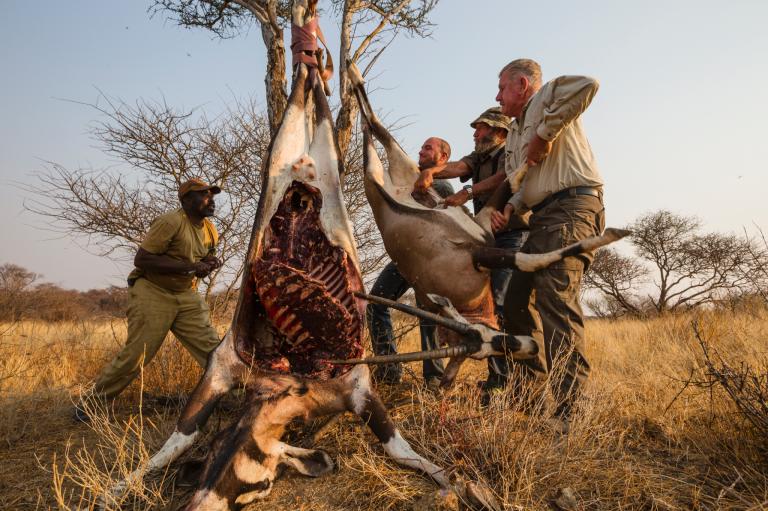 HUNTING IS NOT THE ANSWER

How many animals will be slaughtered before it is de­cided too many are dead? Will species die out and fade into obscurity? Isn’t it our job to prevent this from occurring? With the large prevalence of hunters in today’s world, it is time to define what hunting is. Hunting is not a sport due to the waste of precious animal lives, moral ethics, and its inability to fol­low the definition of a sport.

The dictionary defines a sport as “an activity involving physical exertion and skill that is governed by a set of rules and often undertaken competitively”(Dictionary. com). Un­der this definition, hunting is considered a sport, although this definition seems to be lacking a few main points. When surveyed, many people thought that a sport should be fair to both sides. There should always be a chance for the other team to win, otherwise there would not be a point. Also, a sport should be fun for both sides. If it is not, then the sport stops being recreational. A third addition is the fact that peo­ple participate in sports by choice. An animal does not choose to be hunted; it is chosen by the hunter. Therefore, looking at the new definition, it would seem that hunting is no longer a sport: it is unfair to the animal, the animal is definitely not having fun and the animal has absolutely no choice about participating.

In previous centuries, First Nations peoples hunted animals throughout Canada. When they killed an animal, they would honour its spirit. This was done because they believed that all creatures, including humans, were equal in life. One of the ways they honoured the animal’s spirit was to use every portion of the body. They would use the skin for clothing or shelter, the stomach for cooking, the meat for eating and many other portions for various uses. They would waste nothing, and this practice continued for hundreds of years. It still ex­ists today. Many modern day sport hunters do not follow this ideal. A lot of hunters stuff and mount their kills as trophies, or decorations. This is a waste of the animal. Before the dead animal is stuffed, the taxidermist removes the internal organs and scrapes the skin clean. The waste is then dumped into a garbage bin and disposed of. This is an enormous waste of the animal. While some hunters do eat the animals they kill, and use most of it, the majority do not.

While these two issues show how hunting is not a sport, there is a third prominent issue that needs to be addressed. If people believe that killing humans is wrong, why do they not believe the same about wild animals? If a person walked into a gun store and told the clerk that he/she was going to go hunting, the clerk would start setting up the license. If the same person told the clerk that he/she was going to hunt hu­mans, the clerk would immediately set off the alarm and sum­mon the police. Is it right that humans are considered un­touchable while the creatures we share our world with are allowed to be shot at indiscriminately? In Washington D. C, USA, there is a sniper who has been shooting random peo­ple. He/she is acting like the humans are animals that are in hunting season. There is a huge uproar about the shootings and hundreds of police officers are currently investigating. It is funny how humans react when they are on the receiving end of their own bullets. It shows how the animals must feel when a hunter enters their habitat and starts killing their fam­ily members. If it is wrong to kill humans in this manner, then it must be wrong to kill animals in the same way.

To kill an animal out of necessity is understandable, but to kill an animal for sport? That is unjust and should never occur. We set out morals for society, like “killing humans is bad”, but when they are applied to animals, they immediately fade away. This always happens and should be corrected.