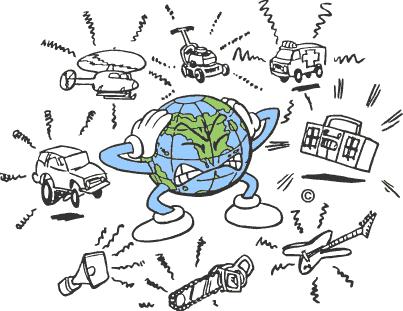 Heat, light, electricity, water and sound, besides a number of things are provided by nature. If the five agents of nature are under control they are rather beneficial to an individual, a society or a nation. If they are in excess and go beyond the control of man or are misused by man they pollute the environment and affect the personal and social health. Excess of heat may decompose anything. To take a simple example the burning of coal in mills and factories the chimneys belch carbon dioxide, carbon monoxide and a number of other gases that pollute the atmosphere. Even the unburnt gas released in a heating process pollutes the environment. A combination of heat and light that emanates from the sun creates radio activity if the ozone layer grows thin. Electricity generated in the clouds may fall in the shape of lightening burning forest creating pollution. Pollution through dirty water is a common aspect. 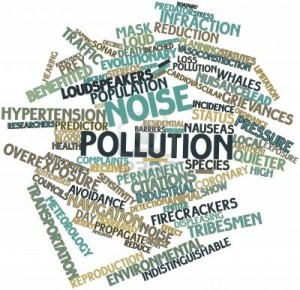 That sound too pollutes the environment may look funny to many. But it does. It may be sometimes imperceptible but no less harmful. Noise is directly related to man both in creation and experience. City roads are much affected with noise from automobiles, bands, mikes and the down town with quarrelling men and women and the elite areas with strange associations like the share market. The worse preys of noise pollution are big cities like New York, London and Shanghai that have perfect air connection with other cities. A flight a minute disturbs the whole city. Equally infected by noise are the areas by the side of a busy railway track.

The question is how sound affects human ear. It may affect even animals. Before the advent of automobiles horse carriages carried men and material. The driver won’t hit the horse .He will move the hunter in air creating sound that jarred the ears of the horse that gave a jerk to let the horse gain speed exploiting the animal through noise pollution. The excessive pitch of the noise created by the trumpeting of an elephant or the roaring of a lion pollutes the whole atmosphere of the jungle. So does the cries of an unruly husband in a house or a resident area. It is the ear that tells whether a particular noise pollutes the environment or not. Ear and sound have a direct relationship. 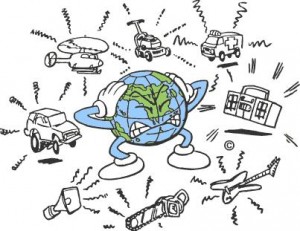 Almost all the cities and towns come under noise pollution. In big cities like New York, London, Calcutta and Delhi the noisy traffic is the biggest menace. In cities like New York and the capitals of European countries the noise pollution comes from the sky too because of the high frequency of the aero planes. Some lower level noises like barking of dogs and fighting animals during night hours are also pollutants as they disturb sleep. They can be detrimental to health in the long run. The high pitch sound affects the ear drum and those who have to hear these constantly are more prone to losing their hearing capacity early as they ascend the age ladder. The constant exposure to noise deteriorates the tender parts of the mid ear. It, in the long run fails to transmit sound impulses to the inner ear. The result is inefficient responses to sound.

The most experienced pollution through speed is in the air media. That is how the thundering cloud deafens people when the thunder reaches the earth. The railway trains too leave their mark of sound all the way they travel. But the most injurious is the sound of aero planes that travel to the earth passage over which they fly. When they start travelling with a speed more than 331 m per second they cross the sound barrier making a quake like vibration in the atmosphere. Supersonic speed is about 1216 km per hour. Since the modern fast aero planes cross the speed barrier they pollute the area all the way when they fly low on cities. As the speed of the plane is more than that of sound the sound remains behind and those in planes are not affected by it.

Anyway noise pollution has been increasing in different ways with the growth of urbanization. Besides taking the environmental pollution, water pollution and the depletion of ozone layer seriously the world will have to develop a culture –sophistication in life to remove or lessen noise pollution too or half the world will be partly or totally deaf in decades to come.