Karl Marx called religion as the opium of the people. He thought that religion numbs the sensitivity of the people. The people, then, become a tool in the hands of the clerics. Ultimately they become a tool in the hands of the rulers- the Kings. The religious preachers and the Kings support each other and treat the common man as sheep and goats. It is a very vicious view. Because of this view of Marx all the communist countries of Eastern Europe and many others became anti-religious after the Russian Revolution against the Czar.

How natural is religion to man was proved immediately after the fall of communism in Russia and the East European countries. The forefathers of most of the people were Christians. The forefathers of the five central republics were Muslims. All these people immediately started going to Churches. And Mosques. Even after the strict control of Stalin and Brezhnev their faith in religion remained in fact in a dormant state. Like the hibernation of the Siberian bear it came to life again and flourished. 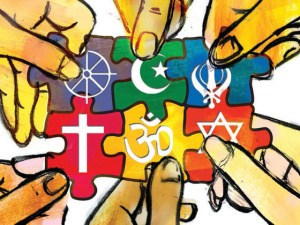 In India religious teachings started from home in the past. The students would collect for prayer before the teaching started. Moral teachings were imparted to the boys and girls through stories of Ramayana, Mahabharata and the shlokas of the Gita. The young ones felt the omnipresence of God. It made them remain away from sinful immoral activities. They could hide themselves from their parents and teachers. But they had a consciousness that God was everywhere. They also had a feeling that it is God who rewards or punishes the good and bad deeds. In this way this religious faith has been responsible for lesser evil deeds in the past.

The so called secular leaders have done the greatest harm to the society. Under their regime it has become a fashion to be irreligious- to make a fun of the scriptures, of the religious personalities, of the saints. This apathy to religion has been responsible for an aversion from good and moral deeds. Soul has been shred to pieces and conscience has been killed. People are gradually becoming permissive. Smoking, drinking and drug taking have become common. They are rather the symbols of ultra modernism. Control over passion is considered a stale idea. There is an average of 50% of them enjoying sex before passing High School examination in most of the countries of the world.

With the loss of religious aptitude people are after extreme materialism. In the past it was said ‘money makes the mare go’. But today it lets the drug trafficking, mafiaism, the ‘call girl’ culture and a number of vices go. The ultimate has already reached in the shape of AIDS that dreaded disease.

The world is full of pains and problems. Sometimes we run from door to door to have peace of mind. But all human beings have some problem or the other. They may not be in a position to assist us if have firm faith in religion we surrender ourselves to the feet of the Almighty from whom all have sprung and in whom all have to dissolve. Eternal sleep awaits us all under his patronage. But he blesses us all in this life too. He is the last remedy. Only religious faith helps us when all others fail.