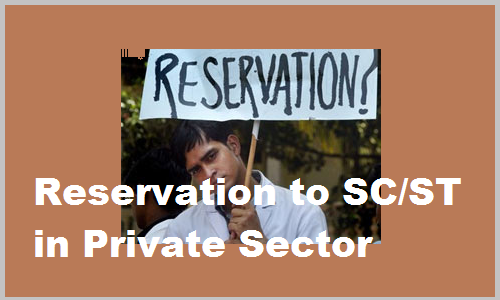 The basic concept of providing reservation to downtrodden social groups called schedule castes and schedule tribes, initially through our Constitution have altogether changed now. Reservation might have provided some relief to the people from the poor and downtrodden sections that had scarce opportunities but the same could have been provided through subsidized better education and other support services. Once a concession or any kind of privilege is extended to a particular class, it is impossible for any government to withdraw it in a democracy where voting decides the fate of any party.

Indian democracy is called by some thinkers as mob-cracy, where the illiterate mob, decides the fate of the political parties. The privilege of reservation was extended repeatedly as withdrawing this privilege means definite removal of the ruling party from the power in the next election. The opposition party or other regional parties assure to grant the privilege if voted for power. This issue of reservation has become a political concession to garner vote banks.

Reservation in government jobs was opposed many times by other classes and not justifiable after such a long time of independence. Reservation means jobs to the inefficient and the incompetent at the cost of other competent and more efficient persons.

In the present scenario the things have altogether changed. Both government and private sector are strengthening educational and training facilities and the government is subsidizing education so there seems to be no ground for continuing, with the reservation policy.

Now the point of extending reservation to the private sector is also being raised from the political platform, little realizing the disastrous consequence; for the country. It is argued by protagonists of extending reservation in private sector also, that with the globalization and due to rapid narrowing of the state sector on account of privatization and the withdrawal of state from many spheres under the liberalization regime little room is left for the reserved classes to get jobs. Many people argue if the prevalence of economic discrimination is the justification for reservation in public sector why it can not be the reason for reservation in private sector. In countries like the US, Northern Ireland, Malaysia and others in Latin America, affirmative action was developed from the very beginning both in public and the private sector. As such the demand for introducing reservation in the private sector is being raised in order to set off the long injustice to the reserved category or so called the downtrodden. It is further demanded that India must enact an Equal Employment Opportunity Act (as in the United States) so as to provide safeguards against discrimination. This could be supplemented by affirmative action in terms of reservation in some categories of jobs and other markets.

So, far private sector is concerned, it is purely a commercial concern, setup to earn profits or investible surplus to earn more profits. The objective of the private sector to earn profit can’t be achieved if it is forced to run by less competent people. This is an age of globalization, liberalization where no business can be successful if it has incompetent, inefficient manpower. Success in the competition requires highly skilled, most competent, most dedicated and result oriented manpower, not the people who have been supported with the stick of reservation. Everyone knows that any private enterprise grows with the support and hard work of the specialized and technically trained, well educated highly motivated manpower. How can a company be expected to carry on with the staff employed under the reservation quota. Not only from the point of efficiency competence is important, it must also be kept in mind, that for the last 65 years, the general class candidates have been suffering a lot because of the reservation provided to their counterparts.

During the short regime of Mr. V P Singh the Prime Minister government several youth lost their lives against the recommendations of Mandal Commission. Now, the government even, intends to extend reservation to religious minorities, providing 4.5% reservation in the OBC category. But, the same has been put to a check the Judiciary. It is a bitter truth that reservation has resulted in mediocrity and repudiation of quality. With the help of legislative support of reservation, the ineligibles have climbed to the high posts and the better qualified with high marks; have just been looking at the injustice being done to them for no fault of theirs.

“Reservation is against the fundamental principles of humanity, it is against the dictates of reason that a man should by reason of birth be denied or given extra privileges.”—Mahatma Gandhi.

This is the demand of time that the present policy of reservation even in public sector should be reviewed honestly without considering its political repercussion for the real good of the general public. So, far reservation in private sector is concerned, it is neither justified nor have any propriety keeping in view the objectives of the private sector.

Providing any kind of facilities, subsidies and financial aid can be justified, but reservation in private sector shall ruin the business competence, efficiency and jeopardize the growth of the economy totally.

In my view providing reservation in the private sector would be a highly retrograde policy. As we know jobs in private sector are never secure, but if a reserved class employee would be shown the pink slip, his group would start agitating with all sorts of irrelevant allegations creating law and order problems. If the society or the governments do want to do something more for the upliftment of the downtrodden they can be encouraged to start their own enterprises.