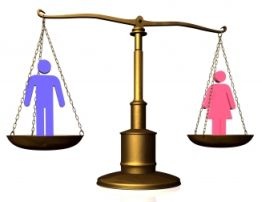 Discrimination on the basis of gender has been an age-old social evil in our country. It is one vice of our society that has changed forms but has remained in all walks of life. There is a prejudice against women and they are often deprived of advantages which are provided to the males. Ours is a patriarchal society which follows the principle of favoring men over women everywhere irrespective of circumstances.

Since the beginning of human civilization in India, women have been considered to be the weaker section of the society and were never given a chance to grow and develop. Discrimination in its extreme form was seen in the form of Sati-Pratha where the wife was supposed to burn herself in the funeral pyre of her husband. A man was never asked to do so for his wife. Widows were boycotted and their presence was considered inauspicious. Women would have to face extreme domestic discrimination. They would not be allowed to study or work like the male of the house would. They would stay in their houses all day long doing domestic chores. They did not enjoy any recreational activity and lived a miserable life. With time, as the country opened up to the world, a lot changed and improved for women. Reformers like Vivekananda took initiatives for the betterment of women. They enjoyed the right to education and could now express themselves on the social front. Women started working to earn their livelihood and started to match up with their male counterparts.

As time went by, women started reaching up to almost all walks of life and started filling up male dominated jobs like the army and other defense services. Women have even performed better than males in many walks of life. We see women as heads of big organizations. Today though they have reached great heights academically and socially, they still have to be subject to discrimination on the professional front. The pay scale and benefits given to males for a particular job is often higher than that given to women for the same work. Crime rates of sexual harassment in the society or at the work place are still high. Moreover, many rural parts have still not opened up to the idea of gender equality.

The main reasons for this gender bias are illiteracy and social backwardness. Poverty has forced many people not to provide benefits to the females in the family. Women thus have to face a social stigma in some form or the other.

Many reforms and laws have made conditions better for women. The government has strived to reserve seats for girls and women in the academic, professional and administrative fields. Helplines are opened for the safety and security of women. Stronger reforms are needed to help women walk with their heads high in the society.